ANY EXCUSE WILL DO:)) 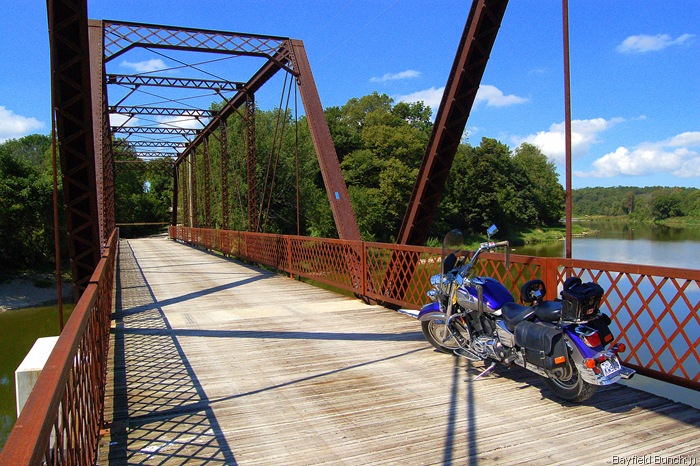 First, let me say that it was my fault the CTR+ enlarging feature on my Win 7 didn't appear to work early Friday morning.  It was 6 a.m. & in the dim light I was missing the CTR button. & probably pressing the one next to it.  I'm adjusting to our new Toshiba laptop & although the keys are basically in the same place as other keyboards I was confused with the layout I guess, plus I was in a huff over that Win 7 magnifier annoyance.  Thanks for people's Win 7 comments saying their CTR+ worked fine or I might not have gone back for a second look-see. 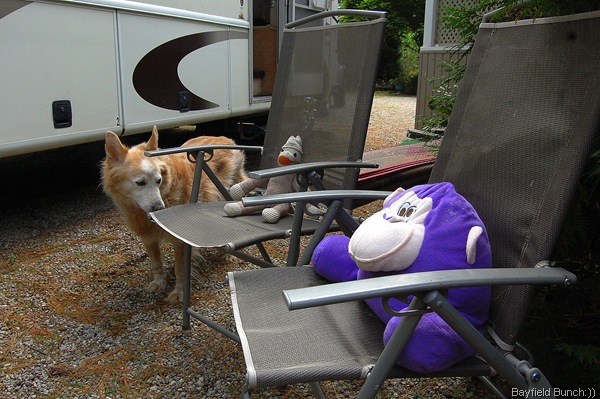 I am one of those people who do not voluntarily go back & read any of my previous posts.  I have done that in the past & it serves no purpose but to leave me with beet red skin over some of the posts I have embarrassed myself with.  My head begins to sway back & forth as the words, "why did I write that" echo through my brain chambers.  Yes, I know there are bloggers out there who will not be able to identify with this of course because in their minds they are convinced they always write 'perfectly positive posts.'  All nicey nicey stuff & I'm sure they are the type of people who see themselves as of course.....making no mistakes.  Well, you will not find any of those people on my blog list!!  And, if you are one of those people & you are on my blog list, just let me know I will be more than happy to take you off:)) 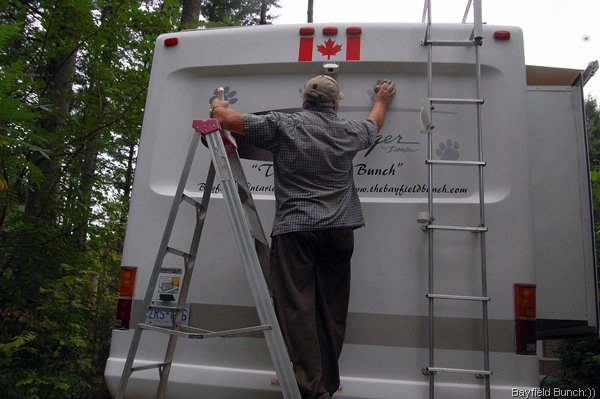 WORKING AT CLEANING OFF SOME BLACK STREAKS

Now, having said all that about my, "why did I write that," I will admit I do regret my wording & phraseology at times, but generally I am usually pretty darn close with my opinions despite my clumsy way of getting them across.  I may not say it as well as others but the gist of what I am trying to say is there. 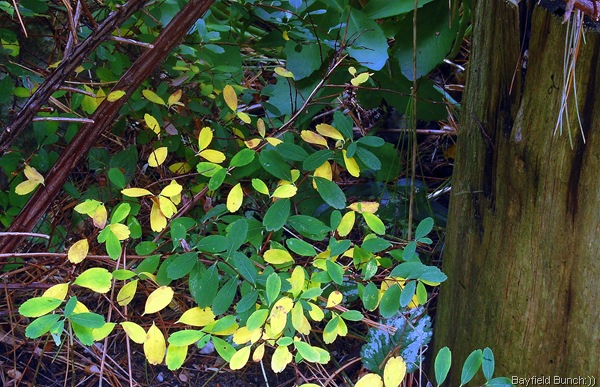 But, sometimes I just have to go back into my post's & change things I am not comfortable with.   Maybe a few words here or a whole paragraph there.  I've never scrapped a whole blog yet.  A simple example of going back to change things is a post I did a couple weeks ago about boondocking in the Ajo Highlands of Arizona.  Under one of our solitary boondocking pics I kind of made fun of RV Parks & all their social perks.  That caption was in direct response to a comment on my blog by a good blogging buddy of mine.  We sometimes take good natured shots at each other in regards to the RV Park lifestyle vs the Boon Docking lifestyle.  He had sent a little well intentioned zinger my way in the form of a comment so I sent one back in the form of a caption.  Well, my caption under the photo bothered me so much I finally had to go back & change it.  Not that I said anything wrong but sometimes the line between good natured humor & sarcastic humor gets a little blurred.  I prefer to stick with the good natured stuff so on occasion I have had to back up, rethink & redo things.  My feathers get a little ruffled sometimes too ya know:)) 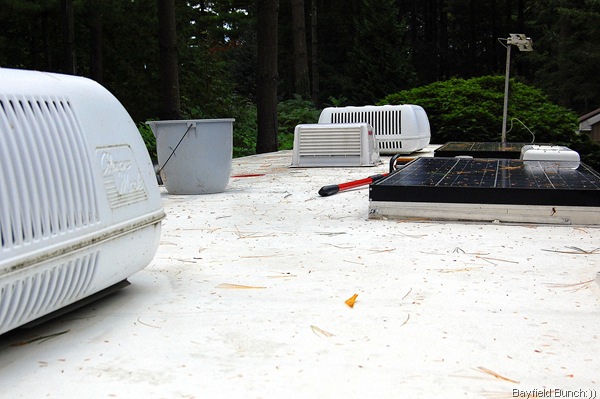 What the heck is everybody yabbling about anyway!!  JERRY left a comment on yesterday's blog about people texting on their cell phones.  Coincidentally this morning I sat in a Wal-Mart McDonalds (egg McMuffin & small coffee) & watched as 3 separate people in the counter line up had their cell phones in hand furiously texting, schmexting or ka-blexting their brains out.  First fella was a middle aged Wal-Mart employee manager looking guy.  Took the young girl three "Excuse me's" to get his attention to order while he held up everyone behind him.  Second person was a young Mother & small child.  The child could have wondered off to Africa's deepest darkest Swahili Land & the totally tunnel visioned text head Mother would never even have known the kid was gone.  The third Yabbler must have had two broken thumbs because he was yapping away into the cell phone about last night's booze party & I don't think he was talking to the local Sherriff either!!  Made me want to go over to the Toy department & get myself one of those loud Oooga Oooga horns & just come up behind these people & give em a big blast....Aaa-Oooooooga!!!! 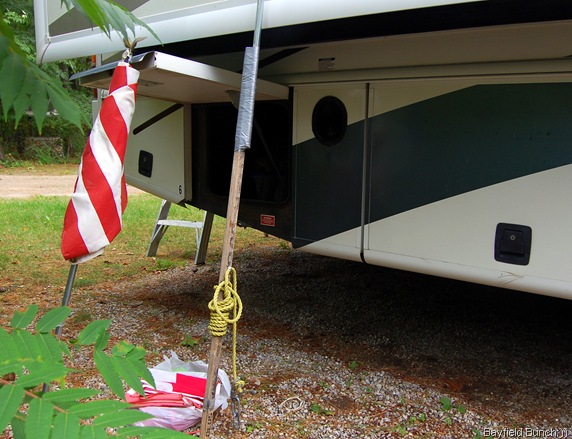 I'm always looking for a good excuse to take the Jeep out for a spin & if I can't find a good excuse I take it out for a spin anyway.  I was into the town of Goderich Friday to pick up some things but of course forgot some stuff which in turn gave me another excuse to go back to town today.  Not too smart on my part but then again driving a tiny little bumpity vehicle that's awkward to get in & out of,(definitely not for ladies with tight skirts) has limited interior space & less than steller gas mileage due in part to it's un-aerodynamical shape isn't too smart either.  But, sometimes ya just got to up & throw your smarts right out the door.  I often get tired of trying to put a logical sticker on everything I do & say.  Sometimes I gots to go do something that is just totally illogical......& fun to boot:))  And you know what.....that just seems to make a whole lot more darn sense to me these days now that I am about to enter the latter half of my aging 60's thing. 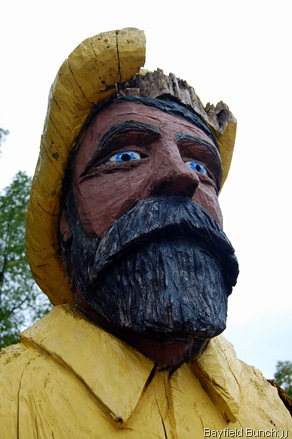 <<< I THINK THIS OLD SALT'S HAT IS IN NEED OF REPAIR

GROANER'S CORNER  Just because someone doesn't love you the way you want them to, doesn't mean they don't love you with all they have.  Ralph and Edna were both patients in a mental hospital.  One day while they were walking past the hospital swimming pool, Ralph suddenly jumped into the deep end.
He sank to the bottom of the pool and stayed there.
Edna promptly jumped in to save him.  She swam to the bottom and pulled him out.  When the Head Nurse Director became aware of Edna's heroic act she immediately ordered her to be discharged from the hospital, as she now considered her to be mentally stable.
When she went to tell Edna the news she said, 'Edna, I have good news and bad news.  The good news is you're being discharged, since you were able to rationally respond to a crisis by jumping in and saving the life of the person you love.  I have concluded that your act displays sound mindedness.
'The bad news is, Ralph hung himself in the bathroom with his bathrobe belt right after you saved him.  I am so sorry, but he's dead.'
Edna replied, 'He didn't hang himself. I put him there to dry....  How soon can I go home?'