SOMETIMES I'M JUST TOO DARNED OPINIONATED FOR MY OWN GOOD!! 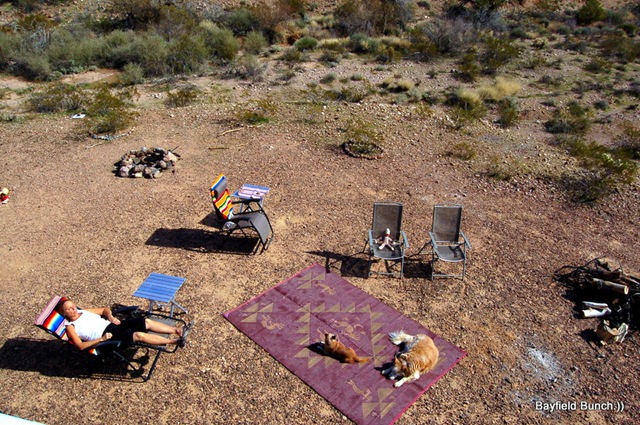 RELAXING IN OUR YARD THIS AFTERNOON

Woke up in a warm fuzzy state this morning & figured it must have been from all those extra hugs & handshakes yesterday.  That kinda stuff can be a bit traumatic for a feller like me who isn't used to all that. 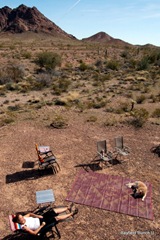 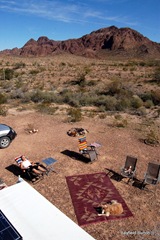 A few days ago when we took the dirt road up to King of Arizona Mine we noticed a sign pointing to another road heading south in the direction of Castle Dome Mountain.  This morning we thought we'd give that road a try because we have been seeing jeep tours going by here & figured that's where they are coming from & going to.  Headed out about 10.  Bit of a hump getting up off the main road onto the trail but we made our way back through the desert about a mile before coming to a dry wash.  It was obvious a 4 wheel drive vehicle was the best way to proceed & we only had a two wheel drive.  I'm sure our Santa Fe would have been alright but why beat it up if we didn't have to.  Made the decision to turn around & head back to the main road. 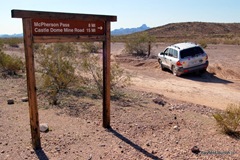 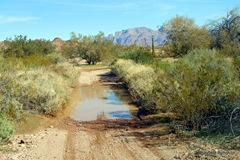 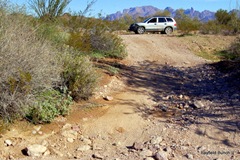 GOT ABOUT A MILE DOWN THIS ROAD & TURNED BACK

On the way to the rig we decided to stop & climb a couple hills just east of the rig.  We could see slightly worn paths along the hillside & figured there may be Mule Deer, or Big Horn Sheep nearby.  Probably was because we found other paths on our 40 minute hike & the sign in the kiosk beside the car said there were those kinds of animals in these parts. 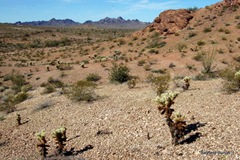 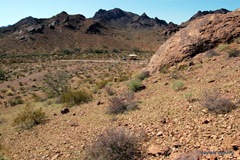 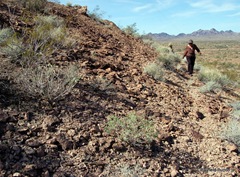 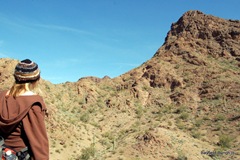 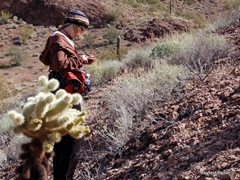 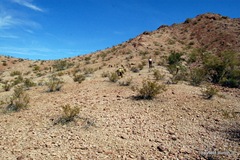 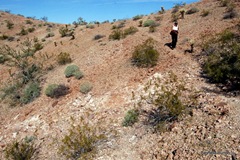 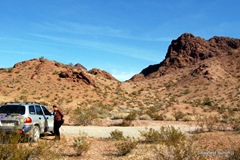 HIKING A COUPLE OF HILLS

Checkers got herself into a very nasty bit of business this afternoon.  Noticed her biting at something on her side & acting unusual.  A quick look see told me she was in trouble with a Teddy Bear Cholla cactus.  These spiny cactus plants are absolutely deadly to the touch.  Their spiny barbed hooks instantly imbed themselves in flesh & they are very, very, painful.  I tangled with one 2 years ago over near Ajo & I think it still hurts to this very day!!  Had to hold Checkers tightly while Kelly worked with a small pliers pulling the hooked barbs out of her mouth & nose.  Used gloves to pull off the larger bunched barbs on her tail, legs, & paws.  It was annoyingly painful for her but she toughed it out being the most bestest girl she could be.  We couldn't get the ones out inside her mouth & in her tongue so we're hoping they will soften & come out on their own.  She seems to be her old usual self tonight despite her painful ordeal. 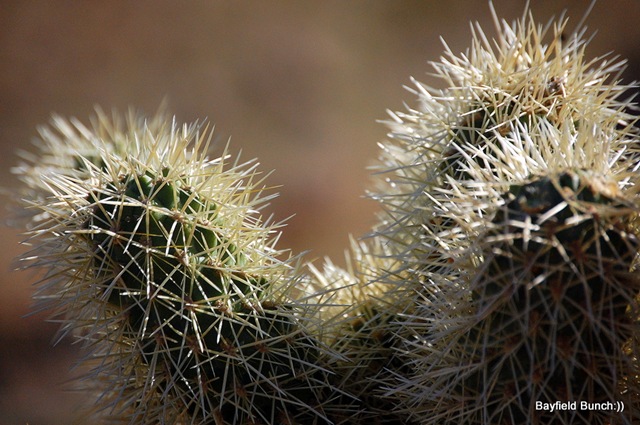 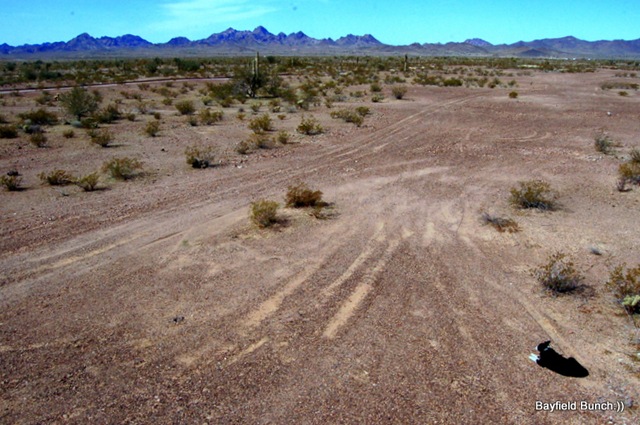 When RVing like this with no facilities it is important to keep a close eye on liquid levels each day such as water, gray, & black tanks.  After about a week or so these levels become important in determining whether it's time to move on & find a dump station with water.  We are good for nearly another week but we're low on groceries  & things.  Nearest store is Quartzsite or Yuma so that started discussions this morning on our next move which is likely going to take place Monday.  Four of five days in one place is generally long enough for me anyway and we have been in this overall area since Feb 5th.   When we reach highway 95 in the morning it will either be a right turn to Quartzsite & Blyth, California or a left turn to Yuma & the Ogilbe road area of California.  We will probably make that decision somewhere along the mile long road between here & the highway. 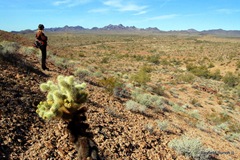 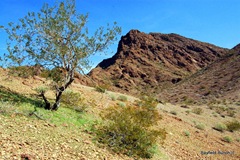 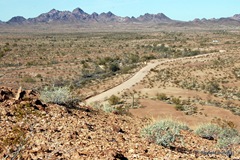 OUR RIG IS VISIBLE IN TWO OF THESE PHOTOS

Now, to the heart of this post!!  I am one of those bloggers who has a tendency to blog a little closer to the edge than some of my fellow bloggers.  Sometimes this is OK & sometimes it is not.  Keep in mind that an opinion is not a statement of fact, it is only one person's opinion & those opinions are usually based on the person's own personality.  I come from a family of very opinionated people & anyone in my home town of Tavistock Ontario knows exactly where I get that from.  In fact I may be hearing some chuckles right now from people who knew my Mother:))  I have unfortunately always been one of those opinionated characters that would reason, 'if you bought a brown car & I bought a red car my car would be better than your car because your car would  be harder to find in a buffalo herd!! 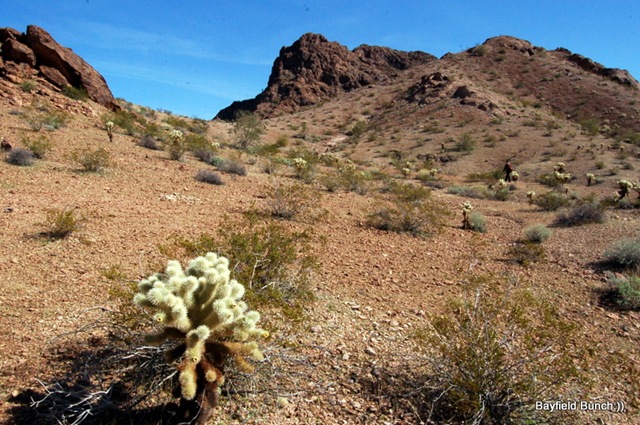 My inherited opinionated characteristics are no excuse for some of  my RV lifestyle opinions though.  But, it is a part of my personality & I have to deal with that daily.  That personality flaw sometimes finds it's way into the blog & I knew somewhere along the line somebody was going to step up & take me to task on that.  Didn't know when or who but this morning it finally happened when a comment came in from my old blogger buddy RICK http://rickpaulettervjournal.blogspot.com/ .   He had finally had enough of my constant chirping RV opinions about RV Parks, etc & rightly stepped forward & wrapped me a good one right on the end of the nose.    JERRY http://jerrysuzylifeonwheels.blogspot.com/ the third member of the 3 D'umegos (or however we spell it) has also tapped me on the shoulder several times when I have got myself out of line as well.   And getting myself out of line occasionally is something too easy for me to do!!

KELLY LEAVES A NOTE ON THIS RIG'S DOOR.  TALKED TO A FELLOW WHO HAD PARKED NEAR HERE YESTERDAY & RECEIVED A $165.00 FINE

Rick is absolutely right in everything he says in that comment & I have to take a step back, look inside, & make some long overdue changes to that little character defect I have been carrying.  My true opinions about what  I am seeing,  doing, & feeling, will remain the same but  my RV lifestyle comparisons will stop.  (I probably missed my calling as a movie critic) My east/west comparisons will stop & my digs at the 'high enders' will stop.  The RVing community is the best bunch of people I have ever met whether they are driving a million dollar coach or an old VW hippy bus.  I am very proud to be a part of that world & all the great people in it. 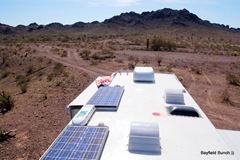 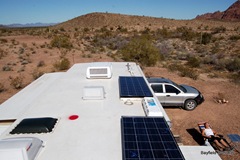 "Dear Al -Something Rick said today:  he swims every day in the pool provided at the RV park where he is residing.  There must be many older RVers that have some form/degree of arthritis, like myself.   Swimming is one of the best forms of exercise for this problem.   One of the things that I have not solved is how to get swimming exercise in the southwest, since I will not ever be able to afford RV parks with swimming pools.     My point is this:  how many RV park sitters are there because they can use the pool?  I don't know, but Rick's comments made me realize that, if I had the wherewithal, I would probably spend time in the parks with swimming pools. "

I thought this email arriving from C Moon today was perfect & it just shows me how far off track some of my opinions have been. 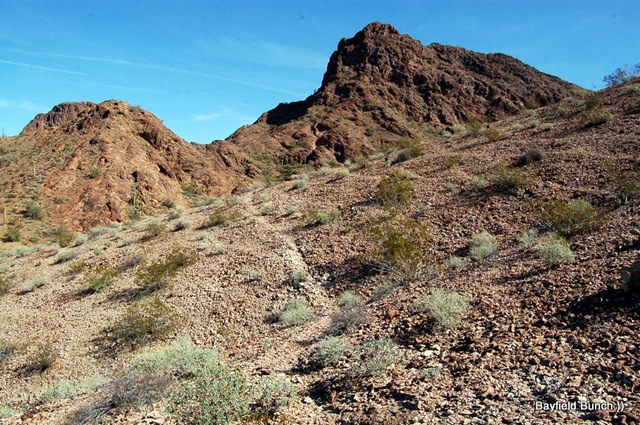 WE THINK THIS MAY HAVE BEEN A BIG HORN SHEEP PATH

GROANER'S CORNER:((  You know  your getting old when you sit in a rocking chair and can't get it going.