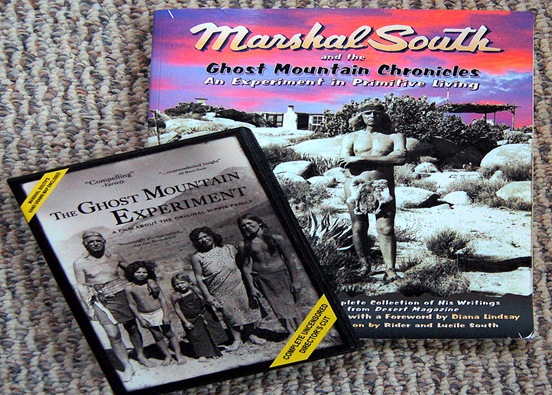 Not sure why the MARSHAL SOUTH & Ghost Mountain story captivated me so much, but it did.  We were boondocked outside of Borrego Springs in the heart of California's ANZA-BORREGO DESERT STATE PARK back in January of 2008 when we drove to the Park's nature center in Borrego Springs to check on day trip adventures in the area.    A ranger behind the information desk told us of many sites to see & mentioned something about a family that had lived atop a mountain back in the 30's & 40's.  Said the site was over in Blair valley, there were a few ruins of the old cabin left, & it was a wee bit of hike to get up to the homestead.  That thought stuck with me & a week later we were on our way to Blair valley in search of Yaquitepec on GHOST MOUNTAIN. 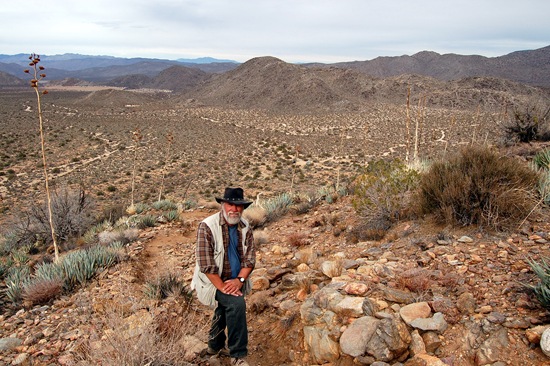 BLAIR valley is about a 40 minute scenic drive west of BORREGO SPRINGS through the Yaqui Pass. You can read about our first trip to Ghost Mountain HERE & see our photos HERE.  A few days after that visit Kelly picked up the book, MARSHAL SOUTH & THE CHRONICLES OF GHOST MOUNTAIN.  I immediately set about reading the book & finished it a few weeks later while we were boondocked over in Quartzite Arizona.  I knew at that time I wanted to not only return to Ghost Mountain again but also wanted to see if I could find where Marshal South was buried.  The book said his final resting place was in the little mountain town of JULIAN not far from Blair Valley.   We also found out a documentary had been made by director John McDonald & a second more detailed documentary DVD by the same director was due to be released shortly but not until after we had already headed back to Canada.  I definitely wanted to get a copy of that DVD somehow.   Little did I know that less than a year later director John McDonald himself would actually contact us, meet us at the foot of Ghost Mountain, & give us a signed copy of his DVD documentary, ‘The Ghost Mountain Experiment.’ 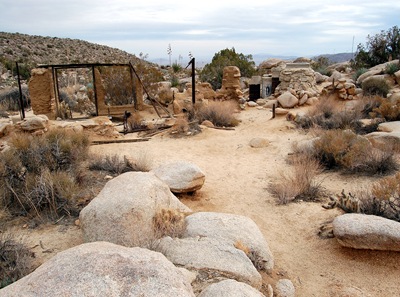 In January of this year we once again found ourselves boondocked near the CLARK DRY LAKE BED close to Borrego Springs at the foot of the Santa Rosa & San Ysidro mountains.  I mentioned in a couple of my daily blogs that we were going to head over to  BLAIR VALLEY for a second trek up to the Marshal South site on Ghost Mountain.  And I also blogged about our day trip to the little mountain town of JULIAN in search of Marshal South's final resting place.  That day's blog is HERE & the photos of our visit to Julian & the cemetery are HERE.

MARSHAL SOUTH’S STONE IS THE FLAT ONE IN CENTER FOREGROUND BELOW, WITH THE TOWN OF JULIAN IN THE BACKGROUND 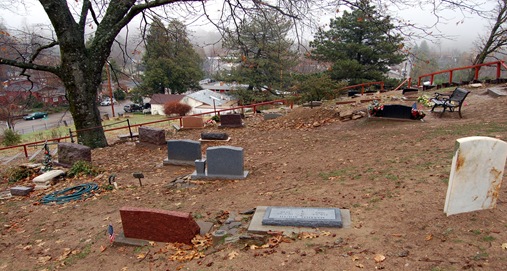 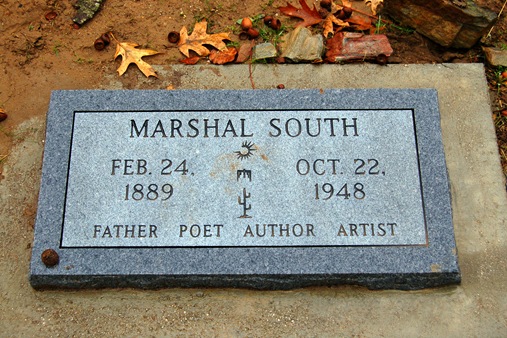 About this time we received a surprise email from the documentary's director JOHN McDONALD.  Said him & his wife Lydia were camping in the area & could meet us at Ghost Mountain if we liked.  He said our BAYFIELD BUNCH site kept coming up on his computer & he had known of my interest in the Marshal South story for quite awhile.  He has a program on his computer that alerts him whenever Marshal South or Ghost Mountain are entered into a search engine, so people clicking on our site kept bringing up the Bayfield Bunch on his computer.  He began to wonder who this Bayfield Bunch was & decided to email us.  Assuming that is how that search program works you may be reading this blog right now John, so a big 'Hello to you & Lydia from the Bayfield Bunch up here in Canada:))' 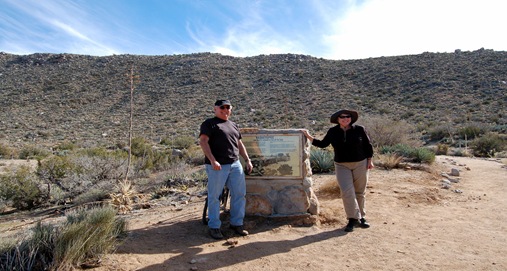 JOHN & LYDIA McDONALD WITH GHOST MOUNTAIN IN THE BACKGROUND.  YAQUITEPEC IS JUST ATOP THAT RIDGE ABOVE THEIR HEADS

The blog for our second visit to Ghost Mountain & meeting John & Lydia McDonald can be found HERE & the photos from that day are HERE.  We did pick up an autographed DOCUMENTARY DVD  from John that day as well. 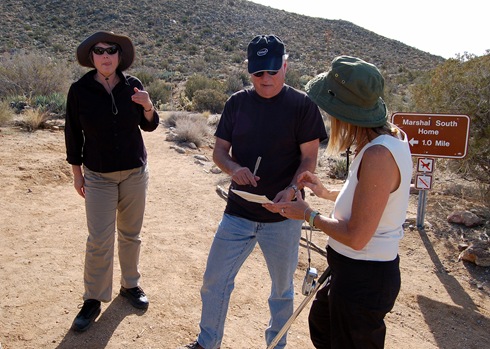 We will probably be back in the Borrego Springs area sometime in January of 2010 & if we are you can be assured I will once again strap on my hiking boots, throw a camera over my shoulder, & head on up the mile high old rocky trail leading to Marshal South's Yaquitepec atop Ghost Mountain.  As I mentioned at the beginning of the blog, I don't know what it is that captivates me about this spot but it's as if I sense something special when I am there.  Being the totally logical person I am I certainly am at odds with my feelings about all that...........but, in a nice sort of way. 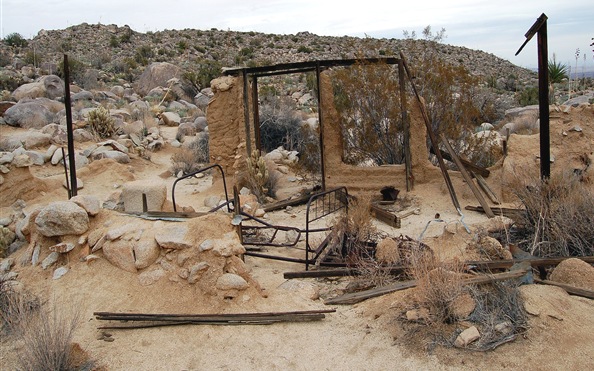 GROANER'S CORNER:((  If you don't have a sense of humor, you probably don't have any sense at all.