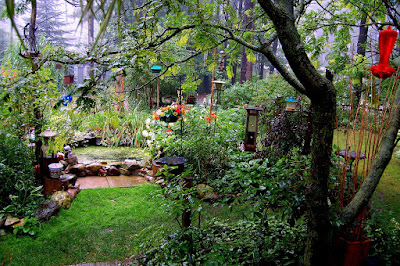 A RAINY DAY IN BIRDLAND

Good thing I decided not to take the motorcycle out for a morning cruise because a band of thunderstorms formed over the lake & came ashore with thunder & lightning dumping tons of water on the area. Good for all plants though because things were getting a bit dry. 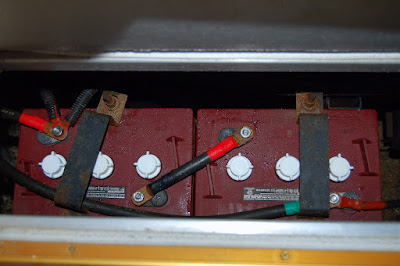 TWO BATTERIES UNDER THE STEPS

In a rare shopping mode last week I dropped into the new Habitat for Humanity store in Goderich & bought a dusty old spice rack for 50 cents & a $5 boom box complete with cassete tape deck. Both items well used but I wanted the boom box to play my old cassette tapes that I had painstakenly made from library CD's back in the mid 80's. Also had some natural bird song tapes from my old Stratford Field Naturalist Club days that I wanted to try out on our front yard birds. Worked great yesterday as the taped bird sounds seemed to draw in more birds.

Had an email from some friends in southern Arizona inquiring about the solar system we had installed on our motorhome in December of 07 in Slab City, California. Gathered all the info to-gether & sent them a reply this morning. Figured I would also put that info into to-day's blog plus our photos & blogs from the 3 day period we spent at the Slabs. Leonard Knight's Salvation Mountain is at Slab City as well & we were there..........................
To J & R: Wasn't readily able to lay my hands on the paperwork for our solar installation but the following is my slightly foggy recollection of what we have.

Our solar system was installed by SOLAR MIKE'S SUN WORKS
in Slab City, California. I know we got two solar panels on the roof with numbers like 120 or 130. I think that has to do with watts or something. They are Kyocera panels I think & there should be some pics in our Slab City Installation album which I will put a link in for below. We also had 4 new batteries installed, 1 monitor, 1 control panel, & 1 2500watt power inverter plus lots of wiring. The inverter is bigger than we needed but it was used & had just come out of a fifth wheel while we were there. Those people were going to an even bigger set-up. Our total cost was somewhere around $3,000+ I think. Installation took a day & a half & you can read about it here....
-INSTALLATION DAY
-OUR LAST DAY AT THE SLABS

Kelly had done a lot of research on the internet about solar installation & most people on the RV NET FORUM recommended SUN WORKS in California so that's where we went. The LIVE.WORK.DREAM couple had their 5ver outfitted for solar there as well after we did. And Slab City itself is worth a look see just for the experience of being there. You can camp out in your rig anywhere. Lots of colorful characters at the Slabs:)) 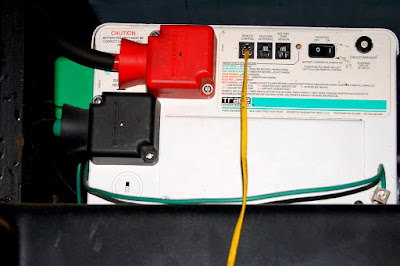 2500 WATT TRACE INVERTER AS SEEN FROM THE DRIVERS SIDE BIN

Our system has been trouble free ever since & we have never ran out of solar power or even come close to running out. We sometimes run the generator for a few minutes in the morning while coffee is brewing. Wouldn't have to but I like to keep the generator up to speed plus if you have a few cloudy days you can always bump your batteries up with the genny so it's good to keep the generator primed & ready to rumble. We can do pretty well everything with solar that we do with electricity except use a slow cooker or micro-wave for long periods of time. Television, lights, etc all work just the same as if you were in your house. 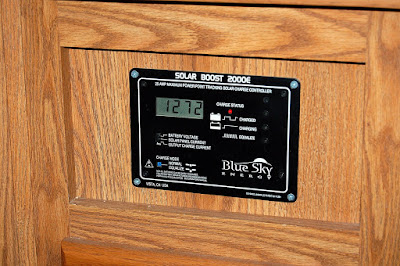 Photos show 2 batteries under the top step passenger side where the old battery was, 2 batteries in cases in the adjoining bin with the white inverter behind. Next 2 pics are the 2500Watt Trace inverter from the bin on the driver's side. Next photo is inside the coach showing the solar panel monitor. Numbers in the high 1300's mean your drawing in lots of good power on a sunny day. It's cloudy & raining right now so the panels are only drawing 1272. Next 2 pics show the control panel for the system & you can see on the monitor that our batteries are 85% charged. If we have a bunch of cloudy days & they drop into the 70% range I just plug into shore power & they are fully charged to 100% in no time or run the generator to charge them. Driving also charges the batteries. 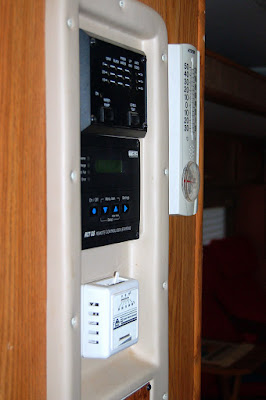 SOLAR CONTROL PANEL IS THE ONE WITH THE BLUE BUTTONS

Hope this gives you a basic idea of solar power. The initial cost is a bit expensive but we have already nearly recouped all that money in saved Park fees over the past couple of years. RV Park fees are one of the biggest money drains RV'ers face. Let us know if you have any other questions & maybe we can answer them. There are some maintenance procedures for the batteries but it's kind of standard I think.....AL. 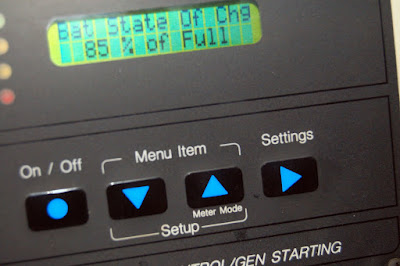